Skip to content
Home » A couple that runs together stays together

A couple that runs together stays together

Meet Jesse and Paige Ausec, they are Hemp Daddy’s Brand Ambassadors, and have embarked on some amazing journeys. I had to reach out to them and hear their story after their recent 48 hour timed race experience at the Jackpot Ultra Running Festival. During the race Paige, with the help of Hemp Daddy’s CBD walked away with zero nausea issues, and the couple set a person record –  clocking in 120 miles in 48 hours. Prior to CBD Paige had always struggled with severe nausea issues during races.

Jesse and Paige have been married for 11 years, (they just celebrate their anniversary in February). They started out as best friends in Junior College and began dating during their time at The University of Georgia. They have been living in the sleepy lowcountry town of Beufort, South Carolina for six years. Here is there story….

How long have you guys been running? Did you both start at the same time, and what was the motivation for running and doing races together?

Paige dabbled with sprinting and track in high school, but I (Jesse) didn’t get interested in running until college, which was around the time that we started dating. We started out just running for exercise around Atlanta, but really didn’t begin doing races until we were married in 2008. We started out running 5ks/10ks and half marathons, and then I convinced her to complete my bucket list item of running a marathon in 2011. We became addicted to that distance and ran 10 more marathons before falling in love with ultra marathons and trail running in November, 2013.

Do you guys run together during the races, or do you each run your own races?

We’ve run 41 ultra marathons, 11 marathons, and dozens of half marathons/other distances side by side, step by step since our very first race. For us, it’s always been about sharing these adventures together and accomplishing things that we once thought were impossible as a team.

How long have you been doing ultra distances, and what was your first race?

Our first ultra marathon was the Mad Marsh 50k in November of 2013. It was put on by a local group, Lowcountry Ultras, based in Beaufort, SC.

What was the motivation behind selecting that as your first race?

Random enough, we saw someone wearing a Lowcountry Ultras shirt at a local 5k race. After the race, we did some googling and learned about ultra marathons. We were fascinated that there were actually races further than a marathon, so when we saw that a 50k was only 5 more miles than we had already done and that the race was local, we decided to give it a shot. We absolutely fell in love with the ultra running community and have never looked back since!

What have been your biggest challenges when it comes to Ultra Running?

We have been very lucky in that neither of us have ever experienced any serious or lingering muscular/joint injuries that have caused us to drop out of a race or prevented us from racing. However, Paige has had significant GI issues over the last 3 years where she would experience extreme nausea and vomiting from mile 50+ during our hundred mile races.

It got so bad that we did have to cut three of our hundred mile races short between the 50-65 mile mark. Even during the hundred milers that we did finish within this time period, Paige was extremely sick and powered through them on sheer will and determination, but was never able to take in any nutrition and survived on ice only. After a few scopes and physician visits, labs and other results showed that she was severely anemic and needed an iron infusion. We saw a significant improvement in her symptoms following the infusion. She still continued to get sick during our races but it would happen later than usual. This was the turning point in which we decided to add CBD into our daily regimen, and things really began to click once we began using CBD. 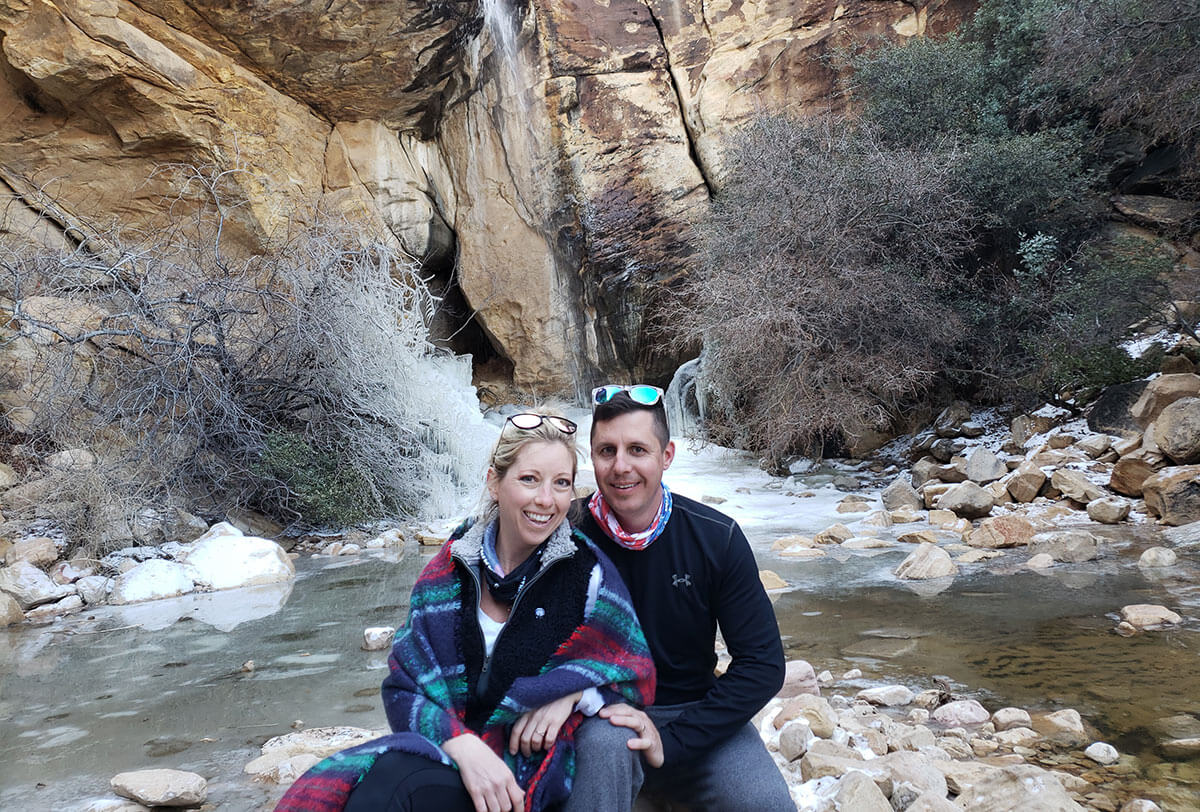 How has CBD helped you guys with your running?

The first benefit that we noticed after beginning CBD was during our last race, The Jackpot Running Festival, a 48 hour timed event in Las Vegas, Nevada. For the first time in 3 years, Paige made it beyond her 50-65 mile nausea wall…all the way to 120 miles, without a single episode! I also tend to have intermittent Achilles tendonitis flair ups during longer races, but it was very brief and minimal in intensity during this race.

Then came the surprise benefits. Following the race, we expected to hobble around for at least the next 48-72 hours at a minimum, which is our usual recovery window. We’re not going to lie and say that there wasn’t any soreness at all, because of course you are going to have significant muscle breakdown and lactic acid build up over the course of a 48 hour event. However, we are still completely in shock that this was the furthest/longest we have ever run and the least amount of soreness that we have experienced.

Now, the next 24 hours following the race completely surprised us all over again. We both woke up after an extremely peaceful sleep and neither of us noticed any soreness! Sleeping after long mileage has always been a challenge itself, simply because it is very difficult finding a position that is comfortable. The combination of our quick recovery/decreased inflammation and improved sleep allowed us to go hiking at Red Rock Canyon and literally jog up and down the Las Vegas strip (because we kept missing the buses) over the next few days.

An additional benefit is that I (Jesse) have been able to sleep like a baby through the night since beginning CBD, whereas before I would wake up multiple times a night or take melatonin to help me fall and stay asleep.

Now that we have experienced some awesome benefits during our first month of taking CBD regularly, we are excited to see how it can further enhance our daily lifestyle as well as produce positive experiences throughout our upcoming adventures. 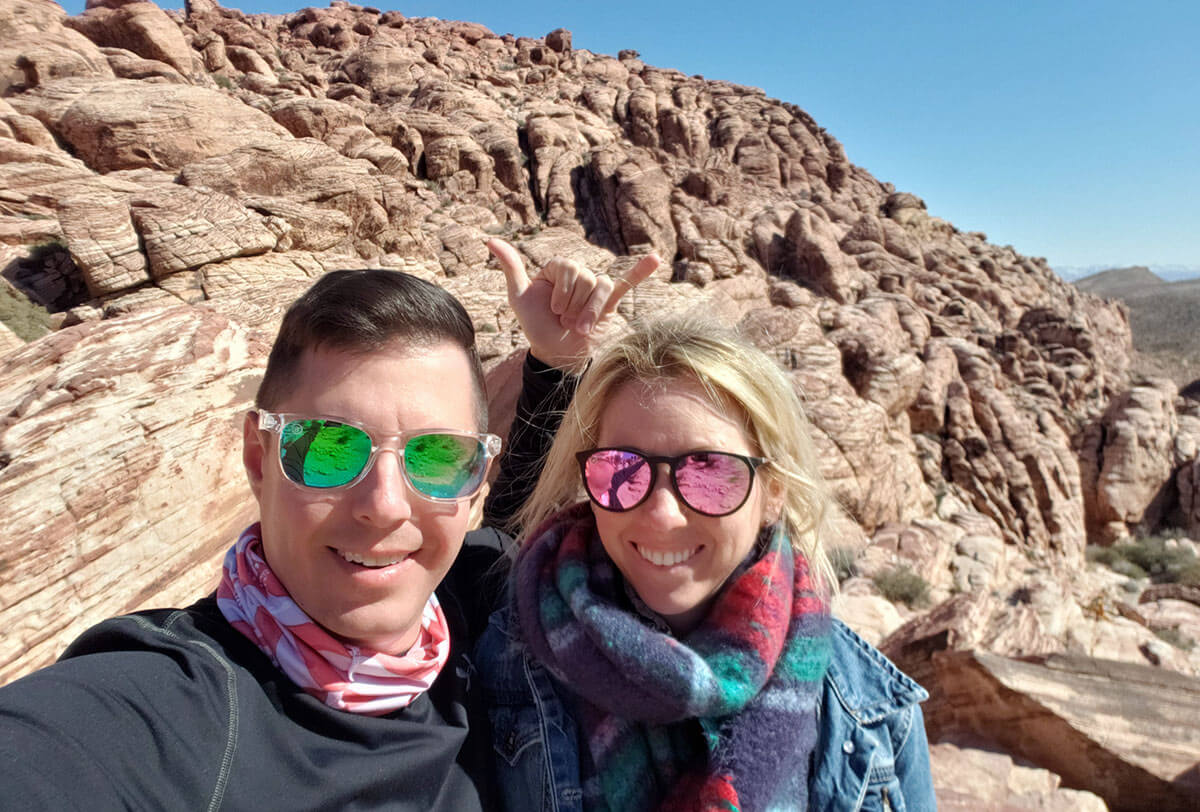 What big races are next for you?

As crazy as it sounds, the 120 miles we ran in Vegas was a training race of sorts for us. At the end of March, we are attempting the Coastal Georgia Greenway 155-miler (CGG155) put on by the Rough Runners run group based out of Savannah, GA. It is a point to point race that begins in Savannah, GA and ends in St. Mary’s, GA, which is right before the Florida state line. It absolutely terrifies us and seems impossible and beyond our limits, which is exactly why we are excited about it!

We also hope to run a few more hundred milers and possibly even a stage race event to wrap up 2019. We need to get redemption on a few of the hundred milers that we had to drop out early from because of the nausea issues over the past few years, including the No Business 100 that traverses both Kentucky and Tennessee via the Big South Fork National River and Recreation Area, and also The Swamp Fox 100, an Eagle Endurance event in the swampy Francis Marion Forest of South Carolina.