I’m going to venture to guess that there are some people out there that are not willing to give CBD a try because of its close association with marijuana. I also have to be honest, I was worried about what my conservative friends would think when they heard I was in the cannabis industry, but surprisingly most people I know have been very open to trying CBD.

Marijuana, as you know, comes with a lot of stigma; it’s even still pretty much taboo in legalized states. Since a lot of people are still divided on the issue of legalized marijuana, people are left not being as vocal about their use of it as they would like. I know this, as I recently talked to a couple from Colorado, a state where both medical and recreational marijuana are legal. But, really this is beside the point, we are talking about CBD here.

CBD, the medicinal and therapeutic part of the plant is actually non-psychoactive, meaning it won’t get you high. In fact, it also reduces the psychoactive effects of THC. Most CBD on the market today is made from industrial hemp, which means it contains less than .3% of TCH, which means there is zero chance it will get you high. Not even if you drank an entire bottle of oil.

Why people are opposed to CBD

So, let’s talk about why people might be opposed to CBD? I have yet to meet anybody in person that is opposed, but I have one degree of separation from somebody that does. Their reasons are solely based on their perception of the marijuana plant, the pothead stigma, and likely false ideas about what marijuana is, and does.

Really, it’s just a big misunderstanding, and lack of education. Not, that the person is uneducated, but that society has feed them false ideas for years, which has tainted their view of a plant that is pretty much harmless… It actually does far more good than harm. They would rather shun the plant that provides loads of medicinal benefits, just because of how the plant has been abused in the past.

CBD is NOT Marijuana

Allow me to shed some light on the issue at hand. CBD is NOT Marijuana, not even close, aside from providing loads of medicinal benefits and pain relief. CBD, as mentioned before, is produced from the industrial hemp plant, which contains little to no THC in the final product. Marijuana on the other hand has high amounts of THC, and is responsible for getting people high. CBD has never gotten anybody high, it has only provided suffering people with medicinal benefits.
Both plants though are part of the cannabis family. I liken it to beer and kombucha. You might be morally opposed to beer, or just anti-alcohol for health reasons, yet you wouldn’t bat an eye when it comes to drinking the fermented (alcoholic) beverage known as kombocha. This probiotic filled health drink is an alcoholic beverage, just like beer, yet it’s COMPLETELY different in terms of what it does.

My hope is that this understanding will break the stigma that is preventing people from being able to heal from debilitating conditions, and being able to get off prescription medications that are doing long term damage, and even causing addictions, and deaths. Just look at the opioid epidemic. CBD just might be the solution…perhaps even medical marijuana.

One that note, I would like to also point out that medical marijuana itself is misunderstood. For the longest time I thought people using medical marijuana had to deal with the side effect of always being stoned. That is pretty far from the truth though. CBD has all the medicinal benefits, so therefore medical marijuana is higher in CBD, and lower in THC, and the CBD also combats the psychoactive effects. (note: you can still get medical marijuana that is high in THC)

THC has yet to be legalized in all 50 states, but thankfully CBD is. One prescription drug company, Greenwich Biosciences, came out with a CBD based drug and was recently granted permission by the DEA to sell their drug in the US. For many, CBD is providing relief from pain, inflammation, anxiety, depression, and many other things. There is now mounds of anecdotal evidence that very strongly supports CBD as the preferred treatment method over prescription medication.

Is CBD and Marijuana a “Magic Bullet”

I will say this though, it’s important that we don’t overhype CBD or medical marijuana. It’s not a magic cure all. At times traditional medicine may be the best, and only option. It’s easy to say things like “cannabis cures all” but at the end of the day we still don’t know that, and it might not even be true. But of traditional medicine has failed you, or you are just starting to look into treatment options, CBD is definitely something you will want to try, but I urge you to not give up on it if you don’t see results right away. Make sure you work with somebody experience with CBD to make sure you get the dose you need to see the results you desire….and here at Hemp Daddy’s we are here to help. Never hesitate to reach out with questions.

We manufacture 3 types of CBD products designed to satisfy various customer needs. Our lotions are designed for ease of delivery, treating specific pain areas, and is fast acting. The oil is versatile and be used orally for fast absorption, and our gel caps make for easy ingestion and a more moderated delivery over time. 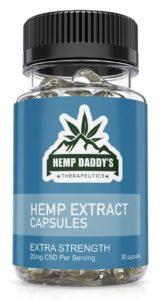